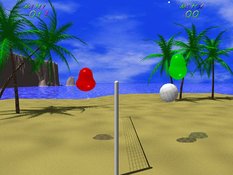 Remember those slimy masses you used to play with when you were a kid? Something similar are the two competitors of this game of Volley

You can play alone against the computer or in two-player mode which you can access in different ways
On the one hand you have the game in local, in a same computer the two players, define which keys each one uses to move and... Let's play!

On the other hand you can play against another person via the internet, even if you don't know your opponent this way

When you download the game the default language is German, however you can extend the languages to English and French through its menu.